Aegis Living is dedicated to transforming the way people see senior housing by providing those with dementia stress-free, comfortable environments that foster a healthy lifestyle and assist with cognitive retention. The company has been a pioneer in the industry since its establishment in 1997 thanks largely to the talented and compassionate professionals who are committed to the happiness and wellness of the Alzheimer’s residents that grace these communities. One such professional is Dr. Shirley Newell, who has worked in geriatrics for the majority of her professional career.

As the Chief Medical Officer at Aegis Living, Dr. Shirley Newell fills a key leadership role. In short, she ensures the quality of resident care programs by implementing advanced care programming and wellness practices. But it’s much more complex and unprecedented than it sounds. In fact, the position actually didn’t exist before Newell came along. Aegis Living realized that, with increasing acuity in its assisted living communities, there was need for a medical presence. So Newell, chosen for her deep knowledge and extensive experience, was recruited to the team.

She quickly determined what the organizations’ needs were and how she could best apply her skills to meet those needs, and she began the difficult process of developing her own role while building a resident care management team, which she now oversees.

While she does some work from her office in Redmond, Washington, Newell – who is married to a neurosurgeon and the mother of two college-aged daughters – spends much of her time out in the field, traveling all over Washington and California as well as other parts of the country. In fact, she’s a jack of all trades.

“It’s probably the most diversified job I’ve ever had,” Newell told us during an interview.

As the chief medical officer, she is involved in the executive team, doing some strategic planning and implementing corporate ideas. But she also does a variety of administrative duties, managing her department to oversee care for 30-plus communities. She handles staffing, education and training of her immediate staff and nurses as well as other layers of care, such as general and care managers in addition to non-medical personnel. Newell is involved in medical informatics, where she focuses on bringing the organization’s medical systems up to speed, and she does a lot of regulatory and oversight work – when there’s a regulatory issue, she works closely with regional nurses and regulatory experts to figure out how they can problem solve to resolve issues.

One of her recent feats is the creation of a new corporate care director position who trains, manages and educates care managers – the people who are front-line staff and do most of the hands-on care with the residents.

“It’s a very important position that’s been created that I support,” Newell explained. “We’re really trying to enforce that care director role, because they have such an important impact on resident care.”

It’s no surprise that Aegis Living sought out Newell for this role. She’s one of the most respected names in the field and has extensive experience – she worked in health care for more than 30 years before joining the Aegis team and has a background in urgent and tertiary care, psychiatry and research, and Newell has worked as staff and in leadership roles in multiple nursing centers.

After earning her bachelor’s degree in psychology, master’s in biology and medical degree, she completed an internal medicine residency and geriatrics fellowship at the University of Oregon. Newell then began her career at Providence Health & Services and Swedish Health Services followed by the University of Washington​ Belltown Clinic, serving as a primary care and geriatrics physician for more than a decade before working as medical director of Symetra Financial for nearly seven years.

A little-known fact about Newell is that she has personal experience with Alzheimer’s: She housed and cared for her mother-in-law who suffers from a slowly progressing form of the condition. Now 96, she lives in a nursing home back east – she became unable to receive care in-home due to her physical constraints. Newell’s up-close experience caring for her loved one during this time gave her a unique perspective.

“I had always known about Alzheimer’s and cared for people with Alzheimer​’s, but personalizing it made so much difference in terms of my ability not only to empathize but in terms of my motivation to deal with the disease.”

One of the feats that Newell is most proud of is her push toward medicalization, which includes the presence of physicians at the centers. When she was first recruited, Newell didn’t quite realize why they would even need a physician such as herself in an assisted living environment, which has the reputation of being housing for the disabled rather than a place for improving the lives of those with Alzheimer’s, so she was taken aback when she learned of the type of in-depth, comprehensive care that Aegis Living provides.

“I’ve been a geriatrician my entire working life,” she said. “But I had no idea what was involved in this … the complexity of some of the problems that some of our residents experience is quite dramatic, and we provide an environment that’s not only safe but nurturing and rich in its complexity and its support.”

Qualified medical providers from prestigious institutions come to the communities and visit Alzheimer’s residents in their apartments, which is not just an advantage, but necessary for those who have trouble getting out to see a physician.

Additionally, though Newell doesn’t take credit for it, a big advancement that she has recognized since her time at Aegis is the development of the lifestyle enrichment program, which has been created with the help of a professional active in recreational programs for the cruise industry.

“That’s a very innovative program designed around not just entertaining people but working on the four pillars of, basically, lifestyle enhancement, which include – not exclusively – mental, spiritual, physical and emotional well being,” she said.

When asked what the highlight of the job is, Newell expressed the feeling of contentment that comes with this line of work.

“The same feeling that everybody gets here: That it’s meaningful work and that we’re making a difference in the lives of the people that we serve,” she said. “There’s so much room for innovation and improvement, and we just embrace that as a company. People are excited about new ideas and creativity, and [the staff] are also really hungry for medical knowledge and information, so the staff is just very receptive for whatever I have to offer.”

So, what’s in the future for the resident care programs at Aegis?

“We’re going to continue to improve and refine our care and our model of care to be able to deliver the services that are going to be needed by an increasingly complex and high acuity population,” Newell explained. “The challenges ahead are huge for this country and for the world in terms of our aging seniors and especially the challenges of memory care.”

Aegis Living is dedicated to transforming the way people see senior housing by providing those with dementia stress-free [...] 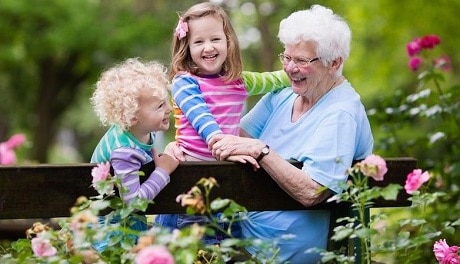 You have worked very hard as the primary caregiver for your parent or spouse. 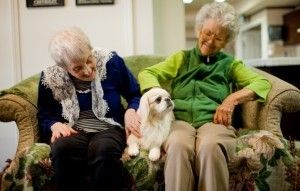 The Power of a Pet in Assisted Living

Many people feel that a house isn’t really a “home” without a four-legged, furry friend. Companionship of a pet has […]